The saddest thing, I think, to ever happen in my travels. I ate at the best restaurant imaginable, and I never wrote down what it was called. Note to self: Kylie, the next time you travel, write down EVERYTHING. I know you thought back then that you’d likely never return to Spain… how could you have known what a travel bug you’d develop over the next few years?

I forgive you. but barely. Now, let’s move on to magical Seville.

Seville (Sevilla!  Seh-VEE-ah!) was about a 3 hour drive from Granada. We checked into a haunted hotel, the Hotel Montecarlo. I’m not kidding. Throughout our explorations the next 3 days, we would come to know this for sure. Creaky, old-fashioned elevators, different, dark wings with flickering lights, and a four-story loft style lobby with echo-ey sounds everywhere.

One of the floors of the MonteCarlo hotel. Notice the elevator on the right of the photo… aka the big wooden door.

A lot happened for me in Seville. I was homesick for the first time. I called my mom, WEEPING, wanting nothing more than to go home.

I made new friends. For the first almost week, I’d been clinging to the group I knew best, not necessarily the ones I would travel best with. I was trying to spend time with people I was friends with back home, but who, for me, were not ideal travel companions. My roommate, Paige and I, had been hanging around them and getting nothing but attitude in return… and I couldn’t tell you why we put up with it as long as we did. Not to mention that they cared more about visiting the expensive stores and bars than actual sightseeing. But it’s okay… because I embraced the idea of getting to know the new people on my tour. There were over 30 of us, and I wasn’t sure why I was limiting myself to a group I didn’t even have that much in common with… but it took a lot to step outside my boundaries and make that first move to bond with them. I’m so glad I did though – I can’t imagine the rest of the trip without having my 7 friends with me by my side. People, take note – don’t spend your limited vacation time trying to get along with people you just don’t mesh well with.  Take the hit, move on, and find people to make amazing memories with in the way YOU want to. Not everyone has to spend their mornings hungover on a bus, wondering what church they didn’t get to see the day before.

Tina, myself and Paige, two of the three girls I spent the most time with on this trip.

This is something I’ve noticed often in traveling. It’s so easy to make friends, if only you know how to go about it. In this example, I came back from the payphone where I was begging my mom to fly me home, mascara running down my face in the most cliche way possible, and some of the girls were sitting there with one of our Teacher/Chaperones, sipping wine and learning how to taste it properly. This would serve us later, in France. By the next city, I was roommates with some of these girls.

Kalifa, the 4th roommate, standing in the haunted lobby.

In brief, I did not record much of Seville, nor do I remember much, which is so regrettable. I remember climbing to the top of a church, looking at the view of the city. I remember visiting the Plaza de Espana, a BEAUTIFUL, exciting building with large grounds and extravagant details. Mostly, though, I just noted that this was a location used for the filming of Starwars: Attack of the Clones. 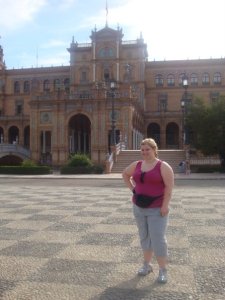 Posing, because STAR WARS. My most tacky tourist outfit of the trip. RIP Fanny Pack.

Most of all, what I remember about Seville is the food. Specifically, the AMAZING cooking school we ate at, twice, because the food was so amazing. I can’t describe what we ate, or what it tasted like, except that it would be a shame to never experience culinary treats such as that food in life. And I, naive and not giving it enough credit, did not write down the name of the school/restaurant.

Try googling “Seville Cooking School” and see how many results come up. I dare you.